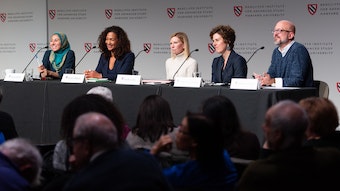 Play video
The Meaning of the Midterms: Who Counted? Who Voted? Fifty Years after The Feminine Mystique Women in the Arab World

Each year, the Radcliffe Institute for Advanced Study at Harvard University hosts a conference that explores from many perspectives the role of gender in a significant aspect of the human experience. This year’s conference, titled "Women Making Democracy," will consider the role of women specifically—and gender more generally—in movements for democratic change.

Activists, journalists, and academics from different fields and disciplines will examine and analyze recent events in countries affected by the democratizing efforts often described as “Arab Spring” and compare women’s experiences of these events with those of women in other moments of democratic change around the world, including Eastern Europe, South Africa, and Latin America.

Elzbieta Matynia, Associate Professor of Sociology and Liberal Studies; Director of the Transregional Center for Democratic Studies, The New School for Social Research﻿