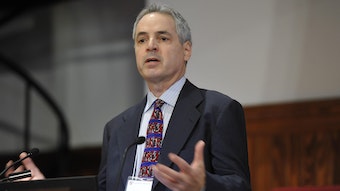 "Understanding and Improving Cities: Policy/Research Partnerships in the Digital Age" brought together civic leaders, scholars, local practitioners, and students to discuss current and future research and policy collaborations. The event featured panel discussions in which scholars and officials discussed work being done in Boston and other locales on education, public safety, economic development, and public management, including several initiatives that are using new data sources in novel ways. Conference participants also had opportunities to explore new partnerships in small-scale conversations. The day’s program concluded with remarks and discussion with Boston Mayor Martin J. Walsh, whose administration is committed to making Boston’s data more accessible and using that data to improve the lives of citizens.

The event was organized and sponsored by:

Major funding for the was conference provided by:

The Initiative on Cities at Boston University
The Andrew W. Mellon Foundation
The NULab
Northeastern University’s College of Computer and Information Science
Northeastern’s College of Social Sciences and Humanities
The Taubman Center for State and Local Government at the Harvard Kennedy School

Learning From Boston's Success: Research, Partnerships, and Initiatives in Education

Working Together to Bring the Innovation Economy to Boston's Neighborhoods

Remarks by and Discussion with Boston Mayor Martin J. Walsh